Jinnai confesses he cheated on Fujiwara 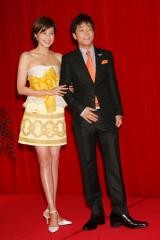 Jinnai, at the center of a high-profile divorce scandal
involving actress N.Fujiwara, confessed Tuesday
he had cheated on her after their razzle-dazzle wedding in 2007.
"We’ve been formally divorced.
I had an extramarital affair and deeply hurt her.
It’s all my responsibility," Jinnai, told reporters.